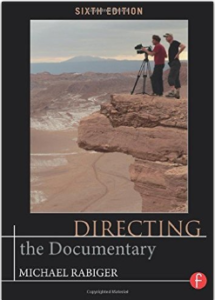 As part of my preparation for Assignment 4, I read the relevant parts of Michael Rabiger’s very comprehensive book, DIRECTING – the Documentary.  The book is a 535 page tome that covers all aspects of documentary film making, from understanding yourself and why you would want to make a documentary, the evolution of documentaries and generating ideas to the technical considerations of Preproduction, Production and Post Production. It has separate sections dealing with advanced processes and information on developing a career in documentary film-making. An extremely comprehensive book.

My starting point with this book was to find out what Rabiger had to say about generating ideas for documentaries. At the basic level, Rabiger states that the concept of idea generation is quite simple (2015:21), ‘look for people who are trying to get, do or accomplish something. There goal may be admirable, reprehensible, or tragic – it doesn’t matter. What matters is that your character – knowingly or otherwise – is engaged in a struggle of some kind.’

To find these characters and their struggle/story, he proposes that you keep an ideas database. To populate that database he suggests a number of approaches, including:

When it comes to selecting the story for the documentary, Rabiger provides very useful ways to ‘test’ if the story will work and also includes very practical advice about not biting of more than you can chew and what questions to ask to narrow the focus of the documentary.

The ‘narrowing the focus’ section was particularly useful for me when I did my assignment. I had ended up with a significant amount of interesting information and details about the new technologies that are being used in farming and how the wheat trade is now a global trade with complex systems and process in place. By using Rabiger’s questions about identifying what is most visible, which areas grab my interest the most and what can be jettisoned (2015:104), I was able to see that some of my interesting points were simply not easy to support visually and I was the able to narrow the documentary down to the harvest process in the field and silos and one issue about the damage that the wild boar do and how the farmer has ‘solved’ the problem.

Another section that I found extremely useful dealt with working out a hypothesis for your documentary. Rabiger provides a series of thought provoking questions that help you to work out where you want the story to go and why it would matter. The questions are interesting in that they explore not only the concrete aspects of how you would construct your story, identifying the conflict areas, the central characters and how you are going to accomplish the story, it also asks you to reflect on what you believe in relation to the story.

In many ways this self-reflection triggered by Rabiger’s questions, caused me think more deeply about my beliefs in relation to documentary. What I realized is that although I sincerely admire film-makers who are courageous enough to expose unfairness, cruelty and criminality where they find it, and have in many instances raised awareness of issues to the extent that lives have been changed and nations laws have been changed, I am someone who seeks the positive and who looks to find problem solvers and innovators. I realized that this is where I feel most passionate – celebrating and making visible what is good.

Directing – the Documentary is a comprehensive book that will serve as an excellent reference for future documentaries.