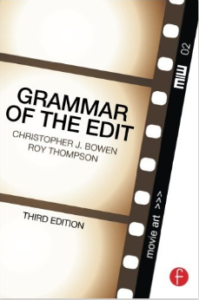 Grammar of the Shot assumes that you have only a very basic understanding of filming. The book introduces the reader to the ‘visual grammar’ that is used to produce films, documentaries, television series and so on.

One of the aspects of the book that I found extremely useful was that each topic discussed was illustrated with photos and, where appropriate, textual examples to help the reader grasp the ideas. It also showed pictures of what something looks like when it is ‘wrong’.

The book was an excellent support text for the course as it covered many of the subjects that were detailed in the course workbook; these included:

The book could be read from cover to cover but I found that I used it more as a reference book. The structure of the book and the way the information is presented allowed me to jump into a section in the middle of the book without needing to understand the preceding chapters.

The book ends with a section where the authors provide a bit of advice about shooting films. They make the point very well ‘that not all rules were made to be broken’ (2013:250) and liken these types of rules to the rules that determine how a sport should be played. They also speak about how the rules or grammar of film makes it possible for the audience to understand the ‘story’ that is being communicated. They caution that there are huge risks attached to breaking the rules of film and recommend that a better starting point might be to start with the basic rules and build on them in creative ways.

Grammar of the Edit uses the same style and structure as its counterpart to discuss editing practices. The aspects of the book that I found most useful were:

The book also talks about how important it is to be familiar with all the footage when editing – which links very well with the advice that was given in the course for assignment 4 to not take to much footage as it takes so long to process.

The book also ends with a advice section. The most interesting bit of advice was the section on pacing which highlights how in recent times there has been a tendency to cut between shots very quickly. Their advice is that you should work out what type of pace enhances the feel of the scene and let that decision determine how quickly you will cut between shots.