During this course I have read a significant number of books, or parts thereof, to support my studies. As the course draws to an end for me, I thought it may be valuable to reflect on some of these books and how they have helped me. 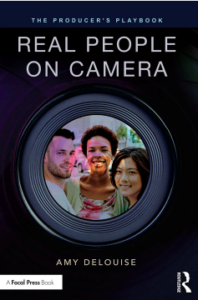 Amy is a video director/producer who has a number of documentary credits to her name and has developed a number of online courses for subjects such as scriptwriting and nonfiction video.  The book was also useful for me because in my work environment, I project manage some in-house video productions where the people who appear in the videos are not professional actors but rather experts in their field. This can at times be challenging because the most knowledgeable expert in a particular field is not necessarily the best person on camera or able to put together dialogue that works well to support the visual medium. Consequently, I need to carefully plan how to work with these people.

‘Real People on Camera’ covers issues such as budgets and schedule, location, working with crews, workflows, etc., but the most useful aspects of the book were the sections dealing with real people that either need to be interviewed or are going to act in a video.

In the first chapter, she speaks about the importance of getting to know the people that you are going to film. Since documentary is about real people and their stories, Amy confirms that getting to know people not only helps you to ‘resolve’ how you going to build the story and what aspects of tale are important, it also builds trust between you and the person. This trust is vital for ensuring that the person will feel confident in your hands when the camera is later turned on them. In getting to know the person, you are likely to work out their mode of operating and this will help you to prepare them for filming; some people may feel more confident if they are given a lot of information about the filming process, schedule and what is expected of them, whereas others may find that amount of information unnecessarily distracting.

Reflecting on my own experience, there have been a number of situations where getting to know a person before filming has been a benefit. In one instance, I was doing a series of training videos that showed re-enactments of day-to-day stressful encounters and then work-related stressful events. The main human factors expert for the project had said from the beginning that he was very uncomfortable on camera and would prefer not to be filmed. Since some of what we covered was subjective, I believed it would be beneficial for this expert to share his views on some aspects of the videos with the audience. He finally agreed to be filmed. Having spent a few months getting to know him, it was clear to me that talking about the filming process would simply stress him, so we focused completely on the subject matter (ironically being about stress!). On the day that we filmed him talking – we decided that he would be more comfortable not looking at the camera, so he had a laptop in front of him with the stress video playing softly and another expert next to him. The filming was done so that it appeared that the two experts were talking to each other about the video they were watching.

I’ve had other experiences with people who were doing re-enactments of air traffic control situations, where it was important that particular ‘errors’ in the persons behavior became evident (yet again for training purposes). Knowing these people, none of whom are actors – there were six of them and they acted in pairs – I adjusted the level of direction based on their needs. Some wanted only the basics – ‘just tell me what type of thing you want to see and I’ll figure out the details’ – whereas others wanted very precise details – what to say, how, with which aircraft, how long, etc. As I became more confident in my own abilities, I realized that I could adapt to their different needs and we could still achieve a successful set of videos.

Amy’s book provides an extremely useful list of points that help to prepare for an interview [Delouise 2016:18]. These include, but are not limited to:

On the last bullet point about bias, I had to deal with this issue when I was producing Assignment 4. One of the controversial issues that came up was the damage that wild boar do to the crops. The laws in Germany prevent the farmer from hunting the boar to reduce the population – only the local hunter can do this. The farmer can provide evidence of crop damage and be compensated but quite often this has been controversial because the farmer only discovers the damage while actually harvesting and so, in effect, destroys the evidence before the hunter can see it. Hence the farmer in my documentary buying the drone to take photographic evidence of the damage. In fact, while discussing the subject with the farmer, it became clear that he felt the hunter was not doing his job properly and not taking adequate measures to keep the boar population down. There is another view that farmer’s could fence their properties to keep out the boar but this is very expensive. If I had wanted to make the documentary ‘controversial’, I could have explored this aspect further and obtained other views. In the end, I decided against this path for a number of reasons. Firstly, I think the farmer would have felt that he had been taken advantage of, secondly, I don’t believe in hyping controversy but rather celebrating ingenuity (he used a drone to find a workable solution) and lastly, I didn’t think I could explore the issue honestly or adequately in a five minute video.

In chapter 3 of ‘Real People on Camera’ – Amy talks about filming people in their real locations. Not only does this help to create the atmosphere and feel of the documentary; it also may help the actors to feel more comfortable because they are ‘at home’ in their own environment. The book provides a helpful checklist of what to pay attention to when going out to recce a location. These include [Delouise 2016:52] but are not limited to:

Overall, the book has been very helpful in providing systematic processes for planning and carrying out interviews and re-enactments with real people. Much of what was discussed was illustrated with examples or case studies that made the book very readable.